Always ready to dive in

The official motto of the U.S. Coast Guard is Semper Paratus – a Latin phrase meaning "Always Ready". It’s a fitting motto, as its members are prepared and eager to respond to emergencies and the needs of local and regional communities any time, day or night. As a coast guard member, Ed Bizorik, ’10, doesn’t find it unusual to get called away in the middle of the night or to fly across several states to help in an emergency. 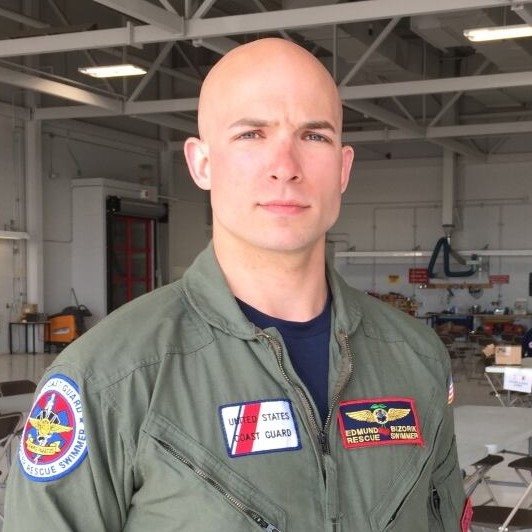 Ed currently works at a Coast Guard Air Station in northern Michigan as an Aviation Survival Technician (AST), more commonly known as a rescue swimmer. While jumping from helicopters into turbulent water is the high-profile part of the job, it requires much more than swimming ability. Ed has EMT skills, survival training on both wet and dry land, and is in charge of managing and training for all life support equipment on the base.

His station patrols an area spanning almost the entire Great Lakes region. Ed has been sent on calls as far out as Duluth, Chicago and Buffalo. Sometimes he’s on duty days - 24-hour periods on where he’s on call. Some days he completes land training, others pool training. His station responds to SAR (search and rescue) cases, which include water rescues and medical evacuations.

These are the situations that they prepare and train for all the time. And, the training never ends. All ASTs must complete Advanced Helicopter Rescue School every five years in Oregon where they run drills in the heavy surf of the ocean.

“It’s such a rewarding experience. They train us so well so in different situations that we don’t panic because it’s second nature,” he said.

COVID-19 has changed procedures on the base, including heavily sanitizing the deck hanger, new procedures for mask wearing and shutting down the helicopter, and a more complex decontamination process.

“We have to look at things in a different light now,” Ed said. “There are more steps involved in everything.”

When you’re dealing with potentially life or death situations, being prepared is what saves lives.

“Not everyone can do this job, so the fact that I was given this ability to help people in this way means I have to,” Ed said.

Ed’s right. Not everyone can do this job. Rescue Swimmer School has one of the highest attrition rates in the military – on average, 70% drop out. For Ed, that meant only three from his class of 12 graduated.

Graduating from swimmer school is not just about physical prowess. It takes mental grit. Candidates are put in emergency situations where they must remain calm and focused while other people are panicking. Ed didn’t have a swimming background, but credits his time at Heidelberg and athletic background for his success.

“18-year-old me had mental shortcomings that would have made it harder to succeed,” he said. “Without my wrestling background rescue swimmer school would have been much harder. You need mental grit and determination, not just physical ability, to succeed, and I learned that through wrestling at Heidelberg.”

Ed always had an interest in health, wellness, and fitness. At Heidelberg, he spent most of his class time in the health sciences ending up with a Sport Management major. He was also part of the wrestling teams that won regular season championships in ’06, ’08, and ’09 and tournament championships from 2006 through 2010. He was a National Wrestling Coaches Association Scholar All-American in 2010. 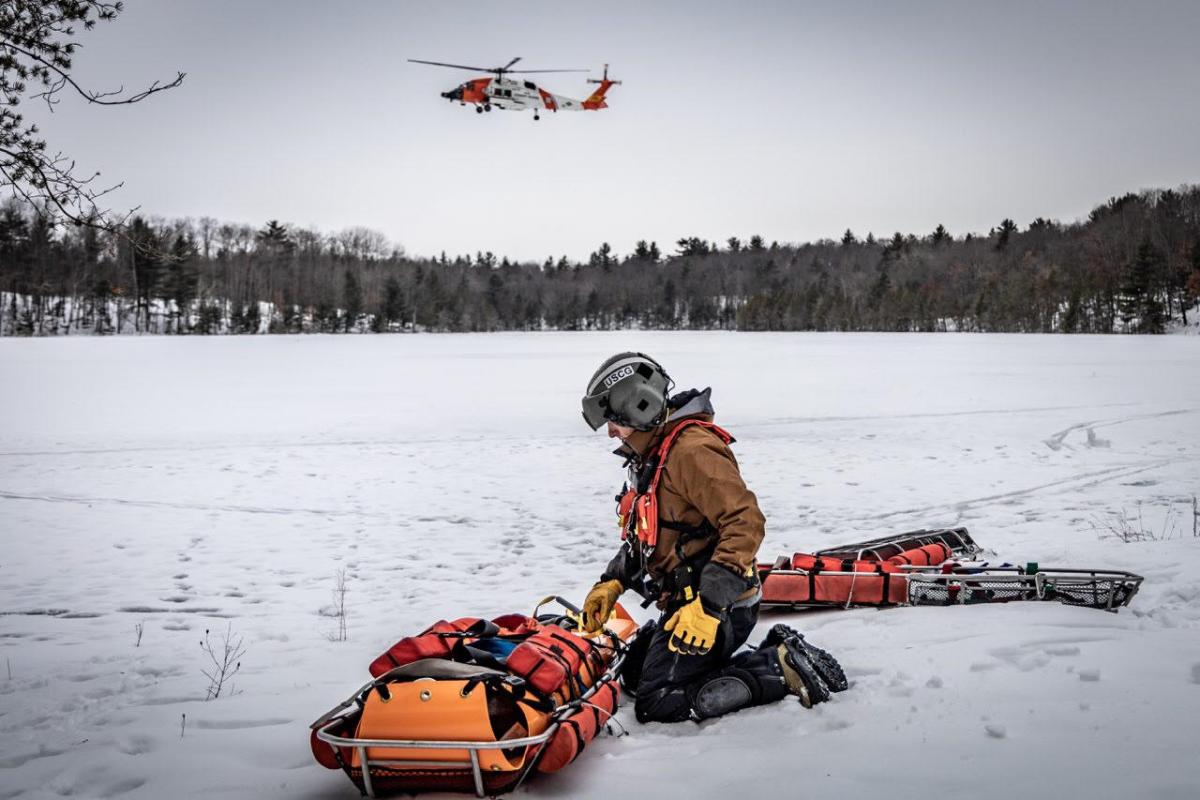 While Ed’s job is about serving others, he also uses his free time to become involved in his community. He is a volunteer wrestling coach, a Sunday school teacher, and a student mentor in the local school district. While the pandemic has changed many things, he still wants to be involved in the community.

“I’ve been blessed and fortunate in my life, and I feel it’s important to give back,” he said. “If I can help someone improve their outlook on life then I’ve done my job.”

That inclination to help others is what drew him to the coast guard in the first place.

“I’ve always wanted to help people,” he said. “People can do that in different ways.”

Ed and his wife Kate (Jones), ’10, have four children and take a systematic approach to their schedules to maintain a well-balanced family life. But they can’t foresee everything. When Hurricane Dorian hit the Bahamas last year, Ed was given notice at 10 PM that he would be flying out early the next morning. He was gone for two weeks helping to evacuate residents and provide medical services. For him, it’s all just part of the job.

A Career on the Move

Ed has lived in five places over the past ten years since his graduation from Heidelberg - Wisconsin, Alabama, North Carolina, Alaska, and now Michigan – to complete his Boot camp, Airmen Program, Rescue Swimmer School, and station assignments. That is a part of the military life, and he and his family with continue to move. Coast Guard members are re-stationed every four years. His next move will happen this soon, though he doesn’t know where yet.

“Moving provides job development and keeps you sharp,” he said.  “I know I’m where I’m meant to be.”

Working in the Coast Guard is not an easy job, but Ed knows he is right where he wants to be – having the privilege to help other people and always being ready to do so.

Writing letters of thanks to healthcare workers

Greek Life Council is happy to announce that the Spring 2021 Traditional Interest Form is now open! 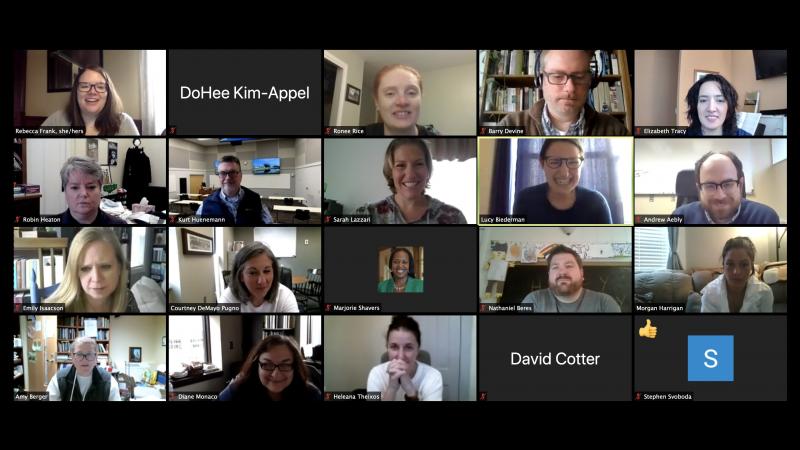 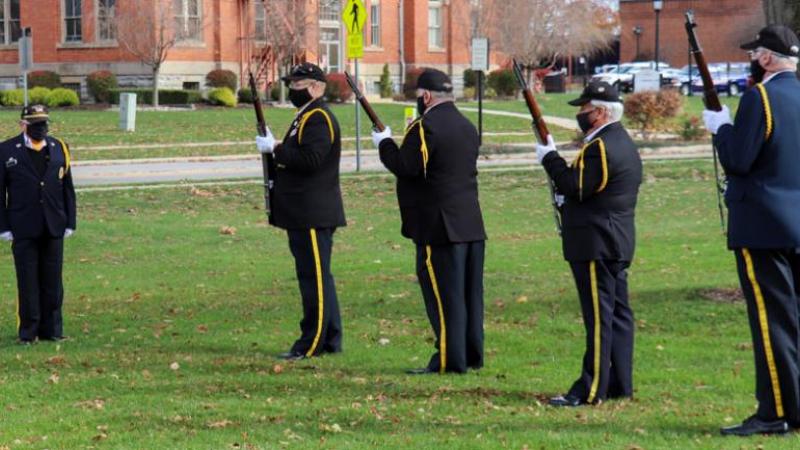 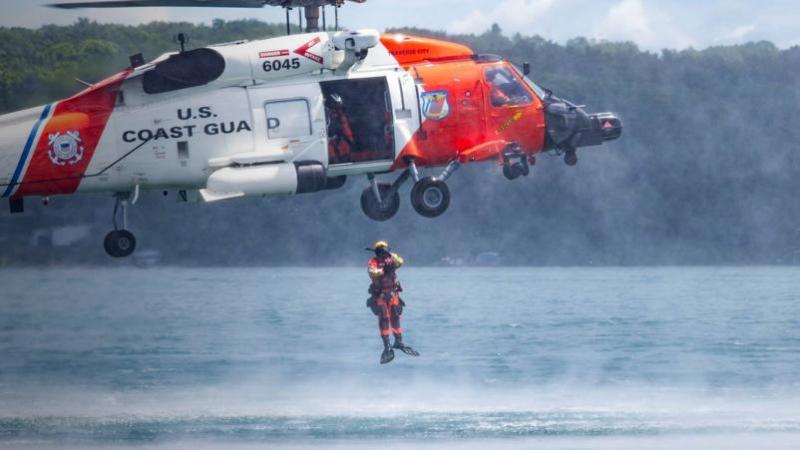 Always ready to dive in