“When I was a kid I used to come to the training camp practices that were open to the public every year. After practice was over, I would watch the players walk into the indoor field and so badly want to go in there and see what it was like. Little did I know I would eventually work for the Browns and literally walk through that indoor field area every single day.”

It’s been quite the season for Cleveland Browns fans. After 18 long years the Browns got to celebrate a playoff berth, only two days later to be hit with some hard COVID-19 news. Browns fans are die-hard fans who are accustomed to highs and lows.

Chris Cola, ’09, understands the roller coaster ride more than most. He has worked for the Cleveland Browns for over 11 years and is currently the facilities manager for the team’s practice facility in Berea. He’s ridden the ups and downs of new head coaches, new quarterbacks, and new hopes, and is still as passionate about the organization as he was as a kid.

Chris has always been an avid Browns fan, having grown up in Strongsville in the shadow of the facility he now manages. He always loved sports and played football in high school, which is how he found Heidelberg.

“I was recruited by Heidelberg,” he said. “I loved the camaraderie of the sport and wanted to continue playing.”

Chris chose to major in both business administration and sports management. He felt the busy life of being a student-athlete - managing classes, practices, and clubs -  prepared him well for his career.

“I didn't know exactly where I would end up, but I knew I enjoyed sports so it made sense to pick a career path where I could follow that passion,” he said.

After he graduated in 2009, Chris worked part-time for both the Cleveland Browns and the Cleveland Cavaliers for two years before being offered a full-time job with the Browns. As the Facility Manager, Chris oversees the entire building - how it runs, maintenance, and renovations. He also works closely with other departments and plans logistics for events such as training camp where 5k fans come in every day.

“This is a dream job I never thought about,” he said. “Getting to work in the NFL and with my favorite team was never something I imagined would be possible. I feel lucky to be here.”

Chris never wanted to sit behind a desk all day, and enjoys the ability the job gives him to be hands-on and helpful to people.

“We’re problem solvers,” he said. “People come to us with ideas and we have to think about how we can make it happen.”

Problem-solving took on a whole new meaning in 2020.

“Everything changed every day,” Chris said. “We didn’t know when people could come back, but we had to make plans on what we needed to do when they did.”

Like most places early on in the pandemic, the practice facility closed in the spring and staff worked from home. In July, the players returned and Chris’s team had to prepare the facility to be as safe as possible for everyone.  Making the facility safe and following CDC guidelines included installing plexiglass and motion-activated dispensers, defining traffic patterns, and ensuring correct social distancing protocols.

“We needed to make it functional for players, coaches, and staff,” he said. “We have a lot of conference rooms where position groups meet. It took a lot of time to reconfigure spaces, even changing a weight room into an additional locker room, to ensure we were meeting all the guidelines.”

Like most NFL teams this year, the Browns experienced COVID-19 problems on the field. From having to sit out an entire position group for one game and now the positive test for their head coach and other key positions ahead of their playoff game, it’s hard to keep the familiar feelings of heartbreak at bay.

But Chris is optimistic.

“This team never made an excuse for anything,” he said. “We have grounded and great leaders and that trickles down. We’ve been through a lot that could have ripped the season a part a long time ago.”

One could argue that the challenges the Browns organization has faced over the years has made it more resilient. Since 1999, the organization has had 29 different quarterbacks and 12 head coaches.

“That constant change can be hard,” Chris said. “Past seasons start off with optimism and excitement but then become draining, as any job would, when things aren’t going well.

Chris knows something about adversity and disappointment on the field. During his time on Heidelberg’s football team they didn’t win any games his first two years. But it taught him a valuable lesson.

“Just because things aren’t going well, doesn’t mean you don't have to work hard,” he said. “Nothing happens overnight and I learned to constantly work hard to get better and be able to do the best possible job I could. No matter what else is going on.”

During a normal year, Chris gets to watch games from the end zone. However, with COVID-19 restrictions he’s had to watch the Brown's success from home this year. But that hasn’t dimmed the excitement the season has brought to him and so many fans. And Chris believes it’s just the beginning.

“At the beginning of the season, not many people thought we’d get here, but there’s been continuous improvement throughout this year,” he said. “I believe the team has a solid foundation that will help them remain competitive for years to come.” 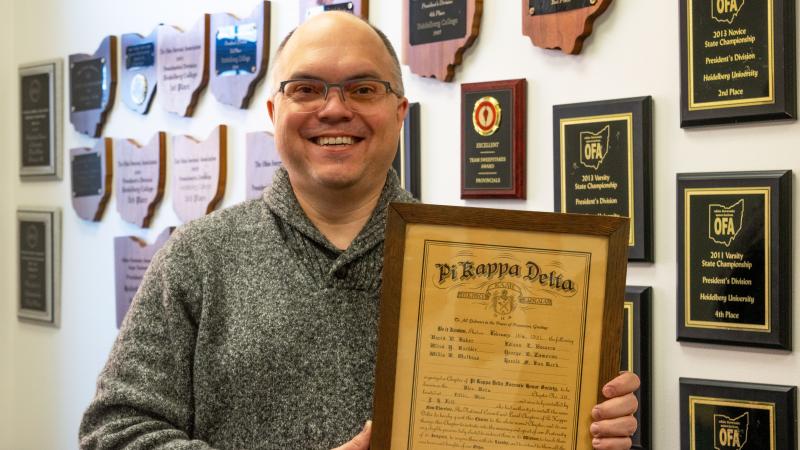